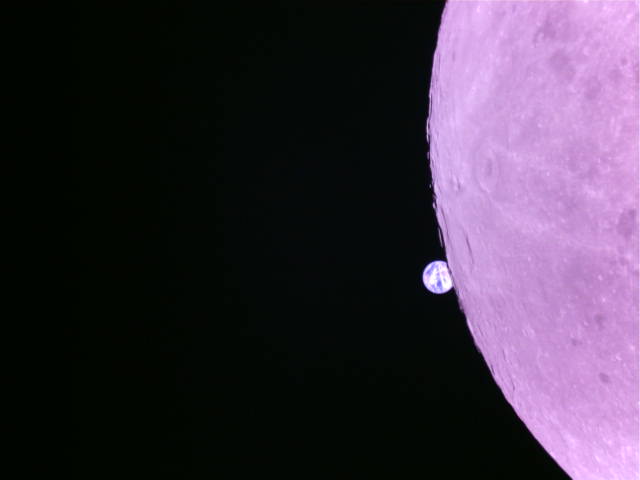 In my previous post, I spoke about the opportunity to take images of the Moon and Earth using the Inory eye camera on DSLWP-B during the first week of June. All the tentative plannings for programming the image taking and downloading the images listed in that post were eventually made final, so the observation runs have been done without any modifications to the schedule.

On June 3, a series of 9 images with 10 minutes of spacing was taken starting at 03:05 UTC. This gives a nice sequence of the Earth hiding behind the Moon and reappearing. One of the images was partially downloaded during the same 2 hour activation of the Amateur payload on June 3. Several of the remaining images were downloaded between June 4 and June 6. On June 7, the station of Reinhard Kuehn DK5LA, which is normally used as the uplink station, wasn’t available, so a single image outside of the Moon series was downloaded using Harbin as uplink station.

This is a report of the images taken and downloaded during this week.

On 2019-03-03, nine images were taken starting at 03:05 with an interval of 10 minutes between each image. These images had IDs 0xC9 to 0xD1 (see this post for more information about image IDs). After the imaging run had finished, between 04:47 and 05:05, coinciding with the payload shut down, image 0xCE shown below was partially downloaded. Only a few chunks of this image were received successfully by the Chinese stations, since Dwingeloo wasn’t online at that time (the Moon was at a low elevation in Europe).

On 2019-06-04 the payload was activated at 07:00. Between 07:09 and 07:45, image 0xCE was completed. After this, image 0xCB was completely downloaded using several transmissions between 07:53 and 08:58. This is probably the best image taken with DSLWP-B so far and the team at Dwingeloo was quite surprised when they downloaded it.

On 2019-06-05 the payload was activated at 07:00. Images 0xCA and 0xCC were downloaded partially. The telemetry server was down during that day, so I have not been able to recover accurate information about the times when the images were downloaded.

On 2019-06-07 the payload was activated at 08:00. Reinhard was not available, so he couldn’t operate his uplink station. Harbin was used as uplink instead and it was possible to command the download of image 0xD5, which doesn’t belong to the series taken on 2019-06-03, but rather is the image taken as the payload was activated on 2019-06-07. The image is shown below (note that it was only downloaded partially). The main purpose of attempting to download this image was to provide a continuous signal for VLBI, but incidentally it is an interesting image because it contains several visible stars. There is only another image of DSLWP-B showing stars, and these can be used to measure the camera pointing accurately.

From the series of images taken on 2019-06-03, there is still necessary to download 0xC9, 0xD0 and 0xD1, and to complete the missing chunks of 0xCA. The download of these images will probably be attempted on future activations of the Amateur payload.

Wei Mingchuan has colour-corrected the images 0xCB trough 0xCE, and made a very nice animated GIF.