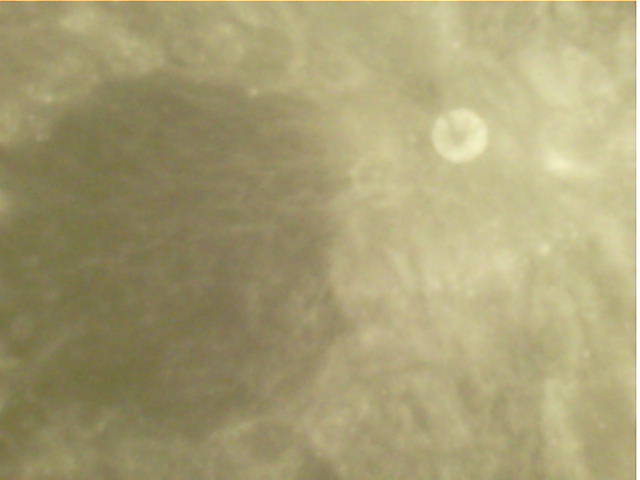 During this week, the Amateur payload of DSLWP-B has been active on the following slots:

In these activations, the last remaining image of the eclipse was downloaded. Also, images of the lunar surface as well as stars have been taken and downloaded. This post is a summary of the activities made with DSLWP-B over the week.

On July 9, image 0xE1 was downloaded. This was the first image in the eclipse imaging run and the only one which hadn’t been downloaded yet. It is shown in the figure below.

After that, some missing chunks of image 0xEA were downloaded. This image was taken and downloaded on July 5, as part of a demo to the Chinese NCLE delegation during their visit to Astron.

To identify to what part of the Moon surface this image corresponds to, I have used a GMAT script with the Moon centred ICRF ephemeris from June 28, in the same manner as in my previous post. This GMAT script shows a simulation of the camera field of view. The two figures below show the field of view and the ground track corresponding to image 0xEA.

In the image above, which shows the simulated camera image (but with a much wider field of view), Tsiolkovskiy crater is visible as the characteristic dark crater on the right, and the Mare Australe can be found near the bottom. The Sklodowska crater is near the centre of the image.

After the download of image 0xEA, a new image of the lunar surface was taken at 14:18 UTC. The download of the image was started shortly after this, but the payload shut down before most of the image could be transmitted. The partial image is shown in the figure below.

On July 10, an image of stars was taken approximately at 14:01, and then downloaded. The image is shown below, but most of the stars are too faint to be seen easily without increasing the contrast of the image.

The team at Dwingeloo performed the following image identification with Astrometry.net. The camera looks into the constellation of Sagitarius, as expected given the locations of the Earth and the Sun at this time of the year (the Inory eye camera always points away from the Sun). The brightest object in the image is Saturn.

After downloading image 0xF1 shown above, another image of stars was taken and downloaded. This image is very similar to the one above, since they were taken only 17 minutes apart. The only difference is in a small rotation of the camera, probably caused by a small attitude change of DSLWP-B.

I have used Astrometry.net to identify the image above (or rather, an enhanced contrast version, to help the star identification algorithm).

After the two images of stars were downloaded, image 0xEE, which was taken on July 9 at 14:17 UTC was downloaded. This image shows a part of the lunar surface. It was first identified as being the Goddard crater by Achim Vollhardt DH2VA on Twitter. The bright small crater is Goddard A, which is 12km in diameter. The resolution of this Goddard crater image is approximately 200m per pixel, so not bad at all.

The figures below show the GMAT simulation for this image. The Goddard crater is clearly visible near the centre of the image.

During the second slot, the Moon was visible from Europe, so Dwingeloo acted as the main downlink station as usual. First, a few missing chunks from the Goddard crater image were downloaded.

Then, image 0xF8, which was taken at the payload power on of this slot was downloaded. This image shows a field of stars very similar to the two images shown above. Its Astrometry.net identification can be found here.

After downloading this image, image 0xF7, which was taken during the first slot was downloaded. This is an image of the lunar surface.

In this image, Mare Anguis is visible as some darker patches at the left hand side of the image. The remaining part of the image shows the area northeast of Mare Anguis. The figures below show the GMAT simulation corresponding to this image.

Mare Anguis is shown near the bottom of this image. It seems to be rather far from the centre of the image. The discrepancy might be explained by the fact that the satellite was passing the periapsis, where its speed is highest and distance to the lunar surface is lowest, so a small error in the ephemeris would cause a large difference in the imaged area.