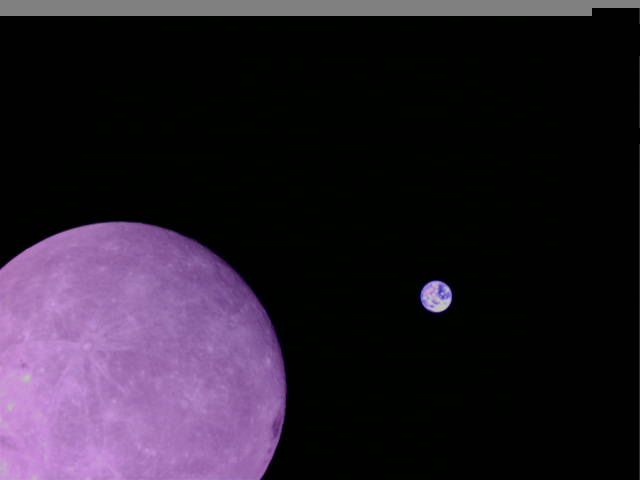 In previous posts, I have already spoken about the chance of DSLWP-B taking images of the Moon and Earth during the beginning of November. The window to take these images was between November 6 and 9. This window included the possibility of taking an Earthrise image, with the Earth appearing from behind the Moon.

The planning for the activations of the Amateur payload made by Wei Mingchuan BG2BHC was as follows.

On November 7, from 8:13 to 9:33 UTC, a total of 9 images with 10 minutes of spacing between each would be taken. These images would be downloaded during the activations on the next days. As usual, an image would also be taken when the Amateur payload powered up on November 8 to 11, but the main focus was on downloading the sequence of images taken on November 7. This is a complete report of the images taken and downloaded.

The stations and people collaborating in these activities have been the Dwingeloo radiotelescope PI9CAM, in charge of receiving the SSDV images on the 70cm Amateur band; Reinhard Kühn DKL5A, who has been providing telecommand using his large 2m Moonbounce station; Wei Mingchuan, who planned and coordinated the activities; and myself, coordinating the activities over the weekend, when Wei was not available. The people in charge of operating the radiotelescope have been Tammo Jan Dijkema, Cees Bassa, Paul Boven PE1NUT, and Auke Klazema (I hope not to forget anyone).

On November 7, after the series of 9 images was taken, the last of them was downloaded. The exposition in this image was very good. As usual, some small chunks were lost, probably due to jumps in the onboard TCXO on DSLWP-B.

On November 8, the first three images of the series were downloaded. This showed the Earth starting to appear behind the Moon. Unfortunately, since the whole Moon was in view, the automatic exposure control of the camera made the images too dark.

On November 9, three of the remaining images were downloaded.

Also, somehow, image 0 in the buffer, which corresponded to SSDV image 128 was erroneously selected and downloaded. This image was taken a few days before November 7.

On November 10, with most of the images downloaded, the main job was to fix the images by downloading the missing chunks. First, image 133 was fixed by commanding manually the download of chunks 0, 14, and 15 (each chunk requires a separate telecommand).

Then, between 14:33 and 14:46 we attempted to fix image 134 by downloading chunks 4, 5 and 28. However the command to download chunk 28 had been generated incorrectly and chunk 18 was downloaded instead.

While these images were being fixed, the SSDV decoder on the telemetry server was not running correctly. It had forgotten the data downloaded on the previous days, so it was storing the new chunks in new images instead of fixing the old ones. This made it more difficult to determine if the images had been fixed correctly (using the log of the SSDV decoder was essential to determine if the new chunks had been received correctly). Indeed, the SSDV decoder hasn’t been fixed yet, so the three images you see above have been made by merging the old and new partial images by hand.

After fixing the old images, a new image was downloaded according to Wei’s planning.

There was still time to attempt the download of the next image in Wei’s planning. However, the Amateur payload switched off at 16:00, before the end of the image.

This image 139 had been download before on November 9. By joining the data from the two days by hand, it was possible to recover the complete image.

On November 10, due to the high number of chunks that needed to be downloaded manually, Reinhard sent a lot of commands, most likely achieving the record of commands sent in a single observation. The telemetry showed a total of 19 accepted commands, but I think that it doesn’t count every command. Also, most of the commands were accepted correctly, with no need to repeat them. A single command lasts 81 seconds, so that is a lot of use of Reinhard’s kilowatt amplifier, and at some points we had to wait for the amplifier to cool down.

On November 11, Hu Chaoran BG2CRY made a new command to download the missing chunk 28 in image 134. This command was then sent by Reinhard and so the image was completed.

After this, a command was sent to download image 138, from chunk 24 until the end. This completed the image.

After this, since we had already finished Wei’s planning and all the images in the series had been fixed, we decided to download image 142, which had been taken on 2018-11-08 at 9:40 UTC when the Amateur payload came online. According to my prediction, this image should show the Earth alone.

Indeed, the Earth was present, but since the Moon was not present, the automatic exposure algorithm of the camera made the image overexposed.

After the download of this image, we decided to stop downloading images to prevent the transmitter from getting too hot, even thought there were still 20 minutes until the end of the observation. The transmitter had been running almost continuously during this observation period and several images had been downloaded, raising the battery temperature to 37ºC.

The complete series of images in order can be seen below.

It is interesting to note that the image that shows the Earth partially occulted by the Moon is image 135. It was taken at 8:33 UTC. On my latest camera planning post, using an orbital state dating from November 1, I generated the following prediction for the situation of the Earth in comparison with the Moon’s rim.

We see that the Earth reappears behind the Moon between approximately 8:27 and 8:40. At 8:33 approximately half of the Earth is showing, as we have seen in image 135. This validates the orbital state and my predictions.

It is also interesting to observe that, by mere chance, the rotation of the images coincides with the rotation I use in my GMAT simulations. The “up” direction in the images is approximately normal to the ecliptic plane, pointing north.

Wei has made a good job at color correcting the images. With the results, he has made an animated GIF that was first published by the PI9CAM twitter account.