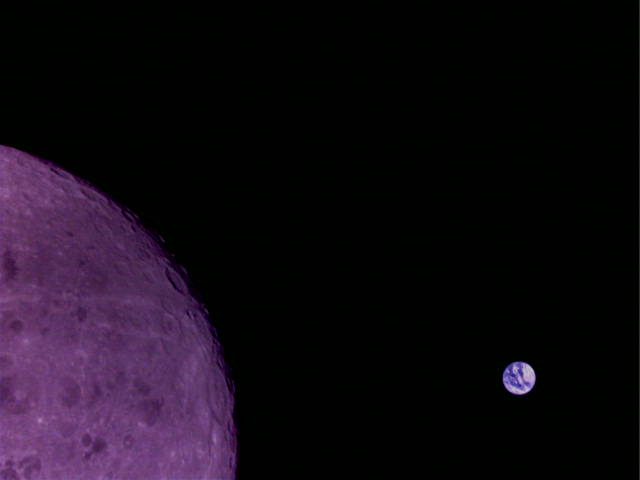 In a previous post I spoke about the images of the Moon and Earth taken by the Chinese lunar-orbiting satellite DSLWP-B between October 6 and 10. Some images taken during these days hadn’t been downloaded yet. The activities have continued during this week by downloading the remaining images and taking and downloading new images. This is a report of the images downloaded between October 14 and 19.

All the dates and times mentioned in this post are UTC. These activities have been coordinated by Wei Mingchuan BG2BHC. The uplink of commands in the 2m Amateur satellite band has been done by Reinhard Kühn DK5LA. The downloads have been received by the PI9CAM Dwingeloo radiotelescope during most of the sessions and also by Mike Rupprecht DK3WN, Imants Tukleris YL3CT and Dimitriy Borzenko 4Z5CP.

On 2016-10-14 at 12:16, the UHF transmitter was activated and an image was taken by the onboard Inory eye camera. This image was then downloaded.

During the same session, an image taken on 2018-10-10 which hadn’t been transmitted yet was downloaded. It was expected that the Earth would be visible in the image, and this was indeed the case.

For this week, the following activation times were listed by Wei in Twitter. This is a novelty in that the UHF transmitter onboard DSLWP-B would be active for all days in the week (normally it is only active a couple of days per week). The goal was to take a series of several images and to download all of them, so many hours of activity would be needed for this.

When the UHF transmitter came on at 08:50 on 2018-10-15, a series of 8 images was taken automatically. The images were spaced by 10 minutes between each image, so the series lasted between 08:50 to 10:10. This series would be downloaded over the next days of the week. The ids of the images of the series were 3 through 10.

On 2018-10-16 there were no people that could operate the Dwingeloo radiotelescope, so the receiving stations for the download were YL3CT, DK3WN and 4Z5CP. During this session, four of the images of the series were transmitted. Only one of them was received completely (except for the first chunk, which is not sent due to some bug) and the others had gaps. The images transmitted were 6, 4, 7 and 5, in this order.

On 2018-10-17, Dwingeloo could be operated during the download. A new image of the series of 8, with id number 3, was downloaded, and missing chunks of the 3 images of the day before were transmitted to try to complete them. The images transmitted were 3, 4, 5, 7 and 3 (again, to complete missing gaps). Image 4 was completed, but 5 and 7 still had gaps.

On 2018-10-19, the remaining chunks of image 7 were transmitted. After completing this image, at 18:18, the B1 transmitter (the one which transmits the images and operates at 436.4MHz) was changed from 250baud to 500baud by a command from DK5LA. Transmitter B0 (which operates at 435.4MHz) was also attempted to set to 500baud, but it didn’t accept the commands and the period of activity of the UHF transmitters finished.

Note that, although the B1 transmitter is now using 500baud, it uses an r=1/4 Turbo code instead of r=1/2, so the net data and the decoding threshold should be more or less as before. One of the advantages of 500baud is that it increases by a factor of two the ranging resolution when doing VLBI or cross-correlations with the Moonbounce signal.

In the future perhaps the Turbo code will be changed to r=1/2 at 500baud, so the data rate will double, making it possible to transmit the images twice as fast. However, the decoding threshold will be 3dB worse. This is not a problem for Dwingeloo, which sees very high SNRs, but it will difficult reception by smaller stations.

After completing the series of 8 images, Wei converted them to grayscale to remove the typical purple hue and then made an animated GIF with the sequence. This can be seen below.

It is interesting to compare this animation with the animated GIF made by Janos HG5APZ of my GMAT simulations, where the Moon is seen to move from the upper left to the lower right . The comparison shows that DSLWP-B was rotated approximately 90º to the left in comparison to my GMAT simulation (recall that the camera always points away from the Sun, but freely rotates around this axis).