Ever since simulating DSLWP-B’s long term orbit with GMAT, I wanted to understand the cause of the periodic perturbations that occur in some Keplerian elements such as the eccentricity. As a reminder from that post, the eccentricity of DSLWP-B’s orbit shows two periodic perturbations (see the figure below). One of them has a period of half a sidereal lunar month, so it should be possible to explain this effect from the rotation of the Moon around the Earth. The other has a period on the order of 8 or 9 months, so explaining this could be more difficult.

In this post I look at how to model the perturbations of the orbit of a satellite in lunar orbit, explaining the behaviour of the long term orbit of DSLWP-B.

By doing some simulations with GMAT, I quickly determined that the major contributor to the perturbations of the orbit of DSLWP-B was Earth’s gravity. Below you can see two simulations in GMAT for the eccentricity. One of them uses the complete force model with lunar spherical harmonics, point masses for the Earth, Sun and planets, solar radiation, and relativistic effects, and the other one only uses the point mass forces for the Moon and Earth. The result is so similar that we can restrict ourselves to the study of the Earth’s point mass gravity as the only perturbing force. Here, and in the rest of this post I am using the first line of the 20160727a tracking file in dslwp_dev as the state vector for DSLWP-B’s orbit. 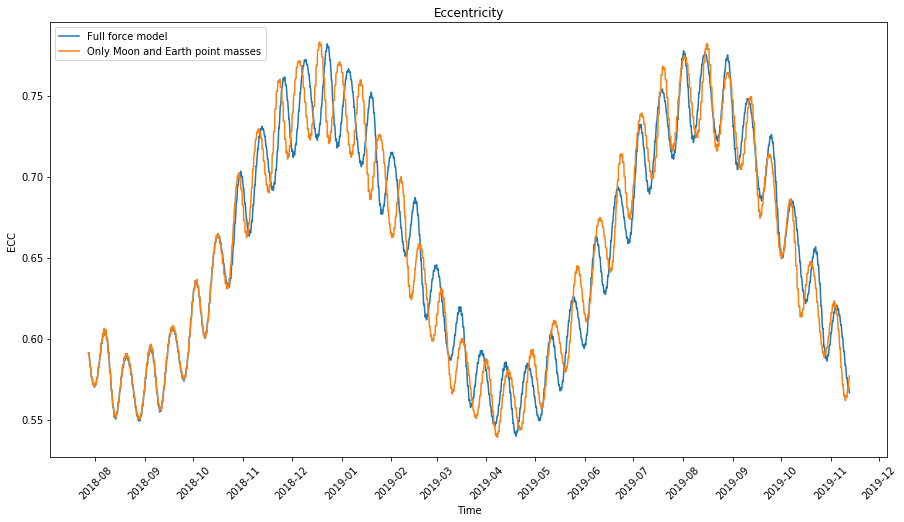 The Wikipedia article contains a derivation of the perturbations of each of the Keplerian elements over one revolution, in terms of a general force per unit mass \(h = (h_1,h_2,h_3)\), and worked out examples for some particular forces (including the force due to the oblateness of the central body). To apply these ideas we first need to determine the force \(h\), which in our case is the gravitational force of the Earth.

Since the orbital period is much smaller than a lunar month, we can assume that \(r_1\) is constant over each revolution. Therefore, the force \(h\) does not depend on time, and so \(\Delta g\) is a linear function of \(h\).

Basing my calculations on the Wikipedia article, I worked out the perturbations of each Keplerian element for a constant force \(h\), but I got stuck, since I couldn’t manage to match what I saw in my GMAT simulations. Indeed, since \(h\) has a period of one lunar month, the perturbations of the Keplerian elements will also have a period of one lunar month, not half a lunar month as the GMAT simulations show.

I couldn’t find the problem with my calculations, so I started reading the book Introduction to the Theory of Flight of Artificial Earth Satellites by P.E. El’Yasberg. This book is very well written and Chapter 16 is devoted to a study of the perturbations caused on Earth-orbiting satellites by the Moon and the Sun. Our situation about the perturbation of a lunar-orbiting satellite by the Earth is analogous and all the results in the book can be applied.

Reading this book I found that the problem with my reasoning explained above was a very basic conceptual error in physics. The force\[-\mu_1 \frac{r_1-r}{\|r_1-r\|^3}\] is written in a non-inertial frame of reference, and Newton’s laws can only be applied in inertial reference systems.

The perturbations over several revolutions, which are our main interest, are computed in Section 16.9 of El’Yasberg’s book. There, an appropriate reference system is introduced. Here we adapt it for Moon-orbiting satellites. The centre of the reference system is the Moon, the \(x\) axis points towards the Earth, and the plane \(z = 0\) contains the velocity vector of the Earth with respect to the Moon (so the orbital plane of the Earth-Moon system is contained in this plane).

We consider the longitude of the ascending node \(\Omega\), the argument of periapsis \(\omega\) and the inclination \(i\) with respect to this system. Note that \(\omega\) and \(i\) are slowly varying parameters, which change only due to orbit perturbations, and \(\Omega = \Omega_0 – \lambda_1 t\), where \(\Omega_0\) is slowly varying and \(\lambda = 2\pi/P_1\) is the angular velocity of the Moon rotating around the Earth (here \(P_1\) is one sidereal lunar month).

El’Yasberg decomposes these perturbations into long-period periodic perturbations, whose period is half a lunar month, and secular perturbations. (Short-period periodic variations are the variations whose period is one revolution, and here they have already been averaged out.) The division between these two types of perturbations comes from noting that the terms \(\beta_j\), \(j = 1,\ldots,5\), can be written in the form\[\beta_j = \beta_{j0} + \beta_{j2} \sin 2\lambda_1(t-t_k),\]where \(\beta_{j0}\), \(\beta_{j2}\) and \(t_k\) are functions only of the slowly varying parameters \(\Omega_0\), \(\omega\) and \(i\). The term \(\beta_{j0}\) gives rise to the secular perturbations, while the periodic term \(\beta_{j2} \sin 2\lambda_1(t-t_k)\), which has period \(P_1/2\), causes the long-term periodic perturbations.

For the case of DSLWP-B’s orbit, the parameters \(i\) and \(\omega\) are shown below. We see that \(i\) oscillates about a middle value of 35º with an amplitude of 10º and a period of 8 months. The argument of periapsis \(\omega\) is monotone increasing with roughly a constant slope and completes a full revolution in 16 months. 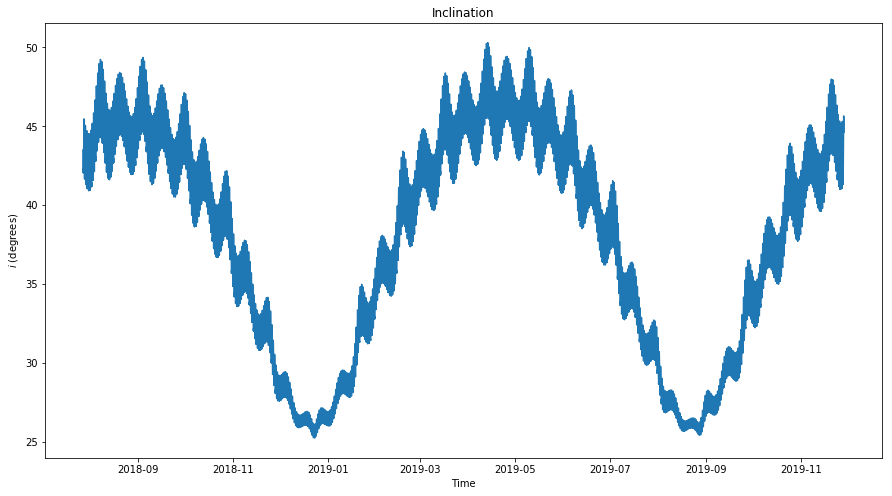 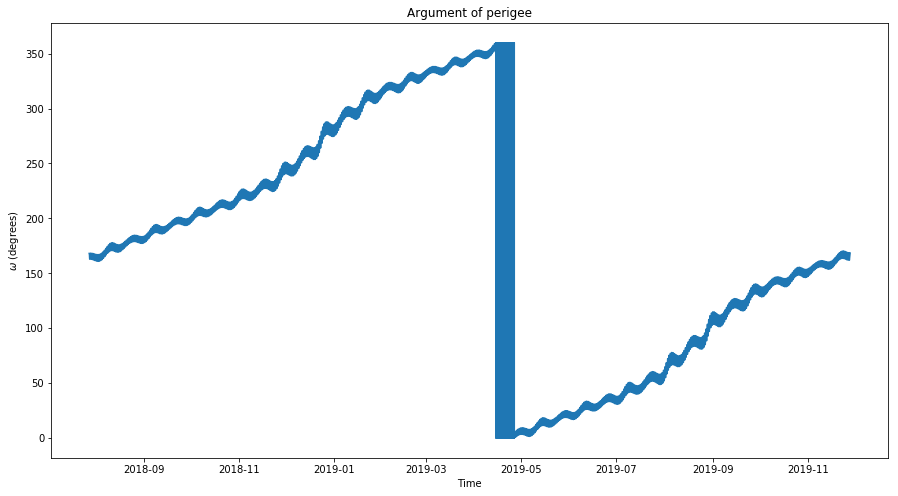 Since the values of \(e\) and \(i\) do not change a lot for DSLWP-B, we can replace them by constant average values \(e_0\) and \(i_0\) in the expressions above to obtain simplified models that give the same qualitative behaviour. 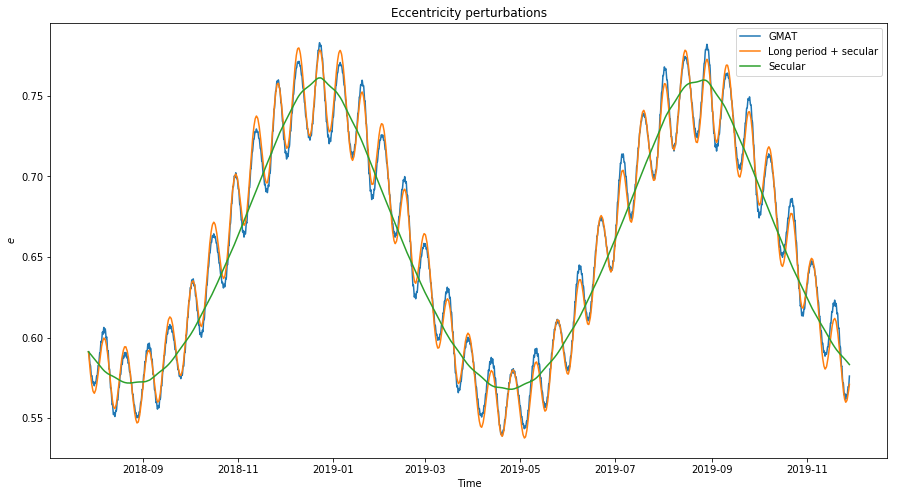 Therefore, we are lead to the study of the secular evolution of the argument of periapsis \(\omega\). However, this is not as easy as the study of the eccentricity. Since in our case \(\omega\) is a monotone function, any error in the approximation of \(\delta\omega\) will tend to accumulate and make the model diverge from the real function when integrating. In this sense, oscillating functions are more tolerant to a small error in the approximation of their derivative. 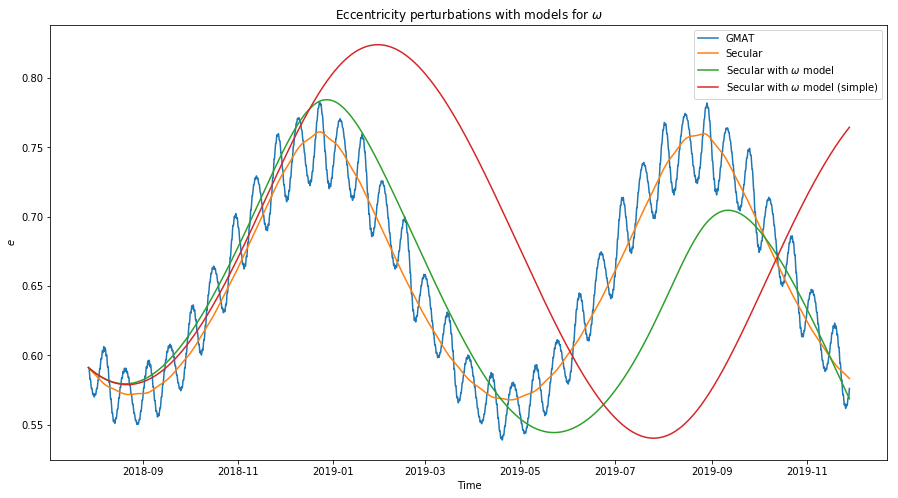 Since \(\omega\) grows almost linearly, an interesting idea to model it is to perform a least squares fit of a polynomial of degree one to the actual data and use that polynomial as a model in the calculation of the perturbations of \(e\). The figure below shows the least squares fit. As you can see, the fit is quite good. 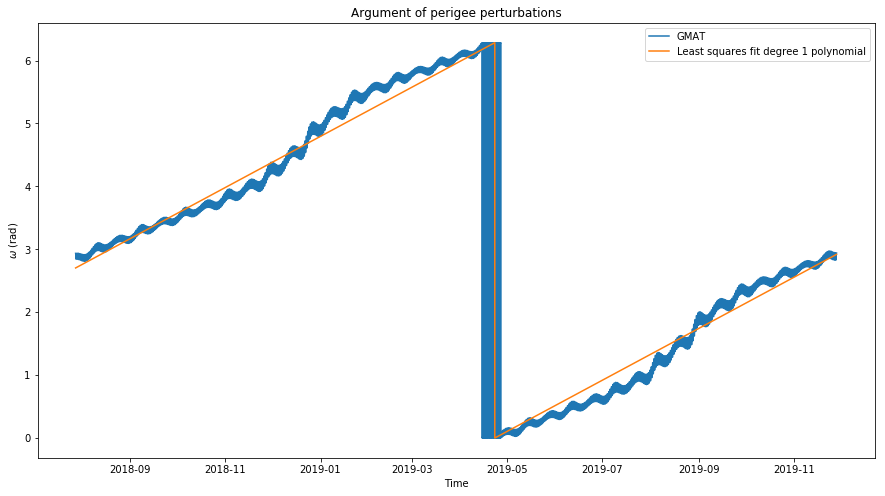 The least squares fit has a slope of 0.0133 radians per day. This means that half a revolution is completed in 236 days, or 7.87 months. This is also the period of the secular perturbations of the eccentricity.

The model for the secular perturbations of \(e\) using the least squares fit for \(\omega\) is shown below. We see that it gives quite a good model. The amplitude and period are close the actual ones. 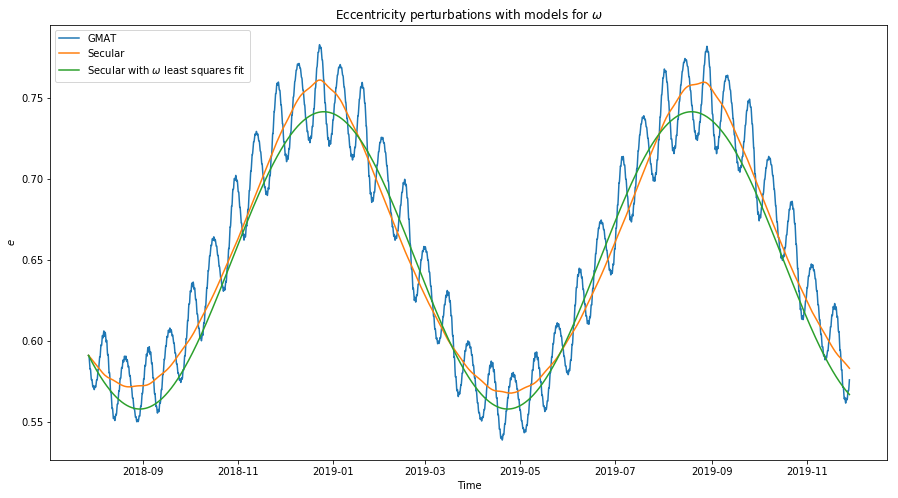 We note two things: first, as in the case of the argument of periapsis \(\omega\), the models diverge slightly from the actual values obtained in GMAT; second, there are some erratic oscillations in the actual value of \(\Omega\) that are not predicted by the long period perturbation model. I do not know the cause of this effect. Perhaps it is caused by higher order terms in the gravitational force of Earth (recall that here we are using a first order approximation). 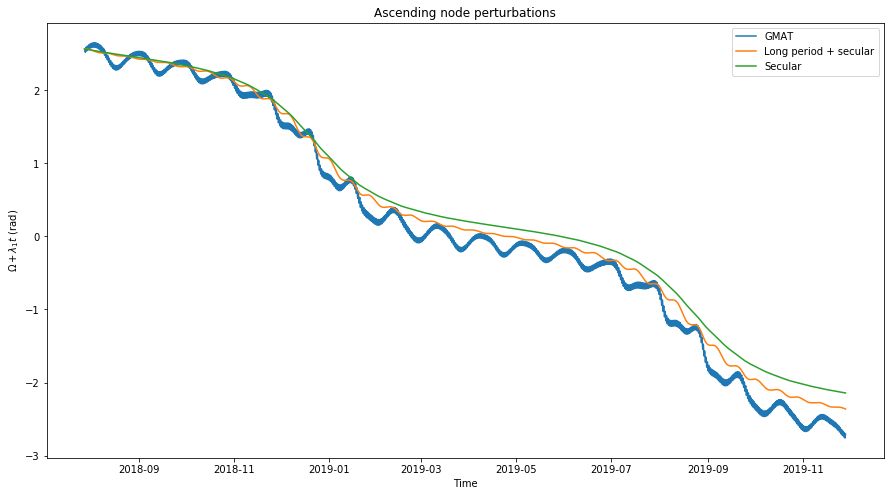 Since the value of \(\Omega\) is not used in the models for the secular perturbations, we do not try to find a better model for \(\Omega\) as we have done for \(\omega\). 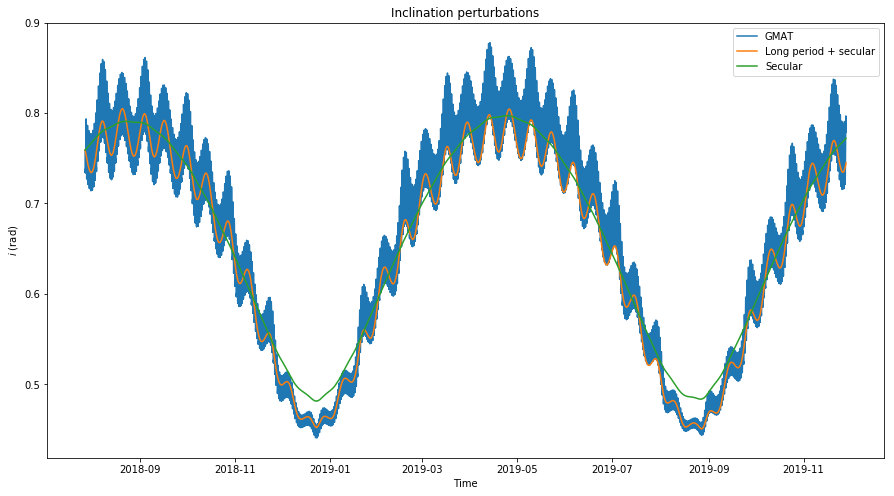 This causes that the inclination, when viewed with respect to the lunar orbital plane has a regular behaviour with more or less the same period as the eccentricity (owing to the term \(\sin 2\omega\) in (2)), but when viewed with respect to the ecliptic plane the behaviour is more complicated, since the time that takes \(\Omega_0\) to make a full revolution is not related to this period. The effect is more visible when the inclination is plotted for several years (see this post). 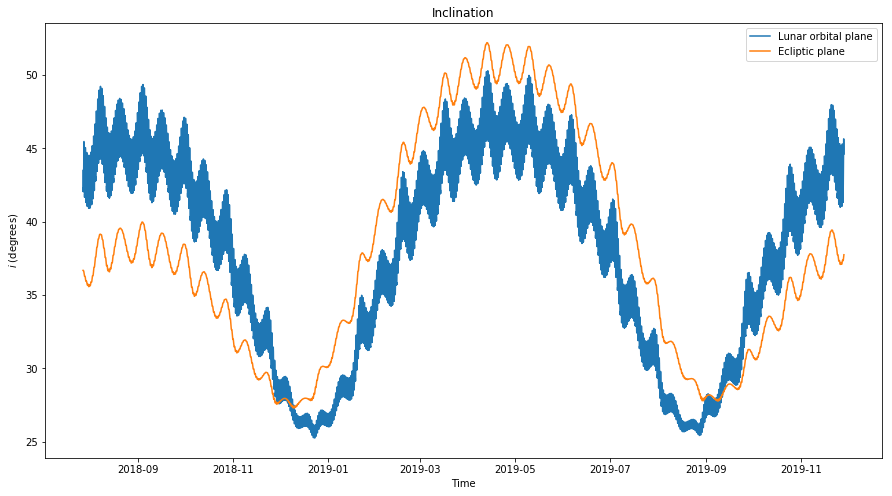 The figure below shows the actual eccentricity, as simulated in GMAT, the model for the long periodic perturbations, which is taken from the equation above with \(e_0\) instead of \(e\), and the GMAT data with the secular perturbations removed. We see that the model is a good match.

The calculations for this post have been made in this Jupyter notebook. The GMAT script with the orbital simulation can be found here.