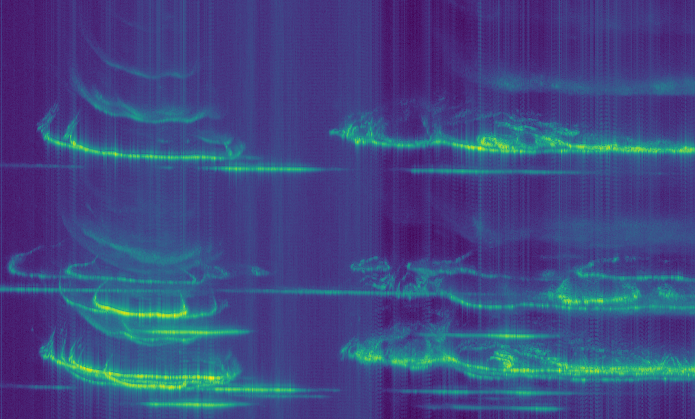 Over the last few days, I have been recording CODAR on 4463kHz to produce images of the ionosphere. I started on Friday 15th and the plan was to leave the recording running until Christmas Day, thus producing some kind of “CODAR advent” images. Unfortunately, there seems to be a problem when the receiver runs for several days that results in the sudden loss of the CODAR signal. This problem can be seen at the bottom of the image below. Thus, I have finished the recording on the morning of the 24th. The equipment and software used is the same that I detailed in a previous post.

The whole image produced can be seen below (click on the image to view it in full size). Each row spans 24 hours, starting at 6:00 UTC. Note that sunrise these days occurs around 7:30 UTC. A jump in the signal can be seen on the 3rd day. The reason for this is that when I started the CODAR receiver, I inadvertently tuned it to an AM sideband, rather than the main signal. I noticed later. The jump was produced as I changed the tuning to the main signal.

The main goal of this long recording was to try to stablish how many different CODAR transmitters are present. In view of the image above, I find this a daunting task. The longer multipaths from one transmitter overlap the shorter multipaths from another one, making counting the individual signals difficult. The best estimate that I can come up with is that there are 3 different transmitters with well spread delays at the top of the graph and at least 3 transmitters all clustered near the bottom. This can be seen in the figure below, taken from the second day at night-time. It seems that every horizontal line that appears comes from a single transmitter. All of the transmitters except one seem to bounce only off a very stable ionospheric layer. The other transmitter bounces off the same layer, but also off a higher unstable layer.

The image below is also interesting. It has been extracted from the beginning of the 1st day.

We see that two of the transmitters turn off for some time. They are in fact different transmitters, since the period of time they are off is not quite the same.

The problem that occurs with the receiver near the end of the 9th day is rather odd. The signal is lost suddenly, but as you can see on the 10th day, a faint CODAR signal is still present. Restarting the receiver fixes this problem, so this is certainly a problem with my receiver. The only explanation I can come up with for this faint signal is that the receiver becomes badly out of tune. This might be caused by the NCO in the Hermes-Lite 2 doing something weird when it has been running for a long time without any frequency change. In any case, this problem seems hard to replicate and to debug, so I’ll leave it be for now.

2 Replies to “A CODAR advent”